​​CDWV Christopher House is the first of its kind.

CDWV Christopher House is the first of its kind.

The Property History - In Memory of MAJ. Christopher Rem

The Christopher House
A Property Rooted in a Military History

Located in South Troy, NY, the house was the first and only home of Christine Rem’s immigrant grandparents who settled in Troy in the early part of the 19th century. The home, built in 1898, was purchased by her grandparents John and Frances Guskie in 1920 and remained in the family until being acquired by Christine and later donated to the Capital District Women Veterans Program in 2015.

For 95 years, this house provided a warm and loving environment for the original nine children and countless grandchildren and great-grandchildren of John and Frances Guskie. In addition to the recent military service careers of Christine and her husband Christopher, the four sons of John and Frances enlisted and served their country during WWII. Christine’s father, Donald Gilhooley (husband of Teresa Guskie) received a Purple Heart for his service during WWII also.

In order for the house to meet the current design, structure, fire and safety standards of a community residence, renovations and repairs are necessary before a certificate of occupancy can be obtained.
​​Christine's family history deeply rooted in the military since World War II. See Photos.
​
In 2007, before leaving for Iraq, Christine purchased the property at 515 1st First Street in Troy, N. Y. and in 2008 after returning to the US began researching a business plan for the Capital District Women Veterans (CDWV). In early 2010 N. Y. State Not-For-Profit registration and IRS Federal Tax Exempt 501(c3) status were obtained.

Having submitted the request to the City of Troy Planning Commission, the single family home was approved in 2013 for use as a community housing residence. In 2014, Troy Architectural Program (TAP) completed the first architectural designs and subsequently updated the designs in 2016. 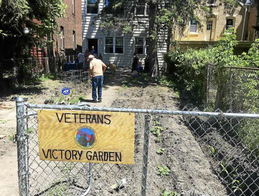 Veterans Victory Garden
In 2016 and 2017 donations from various veterans groups and other charitable contributions enabled CDWV to replace a number of windows, perform necessary electrical upgrades, and begin site prep for a parking lot in the rear of the building.

Rensselaer County Heroes at Home organization provided a team of veterans who helped clear out the building in anticipation of the renovations. In the spring of 2017 this group also helped plant a Veteran Victory Garden and flower garden followed by a traditional Native American blessing ceremony held on June 14, 2017. Three Native American Women Veterans performed the Blessing Ceremony and many local veterans donated vegetable and flower plants.

Many thanks to all for your help and support and for supporting the CDWV Christopher House vision!